Well, Canada Day at Jack's is bound to be a good time and since a lot of our weekly jammers will be "celebrating" all day we thought it made sense to just turn the night into a full gig instead of jam night. So come on down and party the night away July 1st! 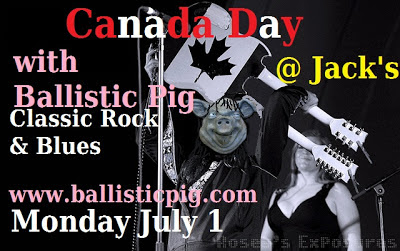 See you there and thanks for everything, Canada!﻿
Posted by Geoff Johnson at 21:06 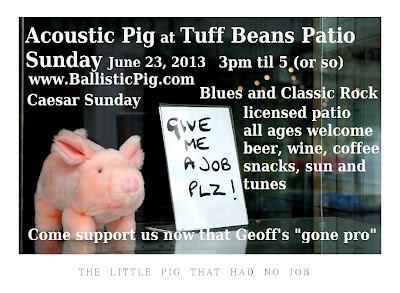 Hope to see you there.. Also this weekend don't miss good friends of Ballistic Pig, The Ross Neilsen Band at Jack's in Tofino on Saturday and Sunday as well as Monday night at a great event at Black Rock Resort in Ucluelet.

Thanks Piglets... see you soon!
Posted by Geoff Johnson at 17:05

Well folks... We went on tour this weekend! We played our usual spot in Tofino at Jack's on Friday to kick it off, then carried on down to Official's in Ucluelet last night. We have our "home coming jam" on Monday at Jack's. Ok, so it's not a tour by Beatles standards but we had a hell of a good time!

We were helped along Friday by the Storm Surf Shop/ Tofino Brewing Company BrewBQ and Air Band Contest. Geoff, our bass and vocals guy was the MC and was happy to use that opportunity to encourage the 450 odd partiers to head to our gig after the event.... AND THEY DID! Here's Geoff in his 80s punk rocker getup for the air band contest (congrats to the air band Loser Pissed for their big win by the way);

We don't have any pics of Friday night at Jack's because we were too busy rocking to a full house but if you have any we'd love to see them... as always you can email them to BallisticPig@gmail.com of post them to our Facebook or Twitter accounts.﻿

Partially recovered, we loaded up the gear and headed down to Official's in Ucluelet. Excited to play a new venue to a new audience and the response was AMAZING! The staff was insanely friendly and we had pretty gals dancing all night! Had a couple of their legendary Karaoke regulars Chris Hansen and Jacqueline Menard sing a few tunes with us, too. Can't wait to go back there, soon.  Again, we were too busy rocking to get any action shots but we did get this "witty" number; 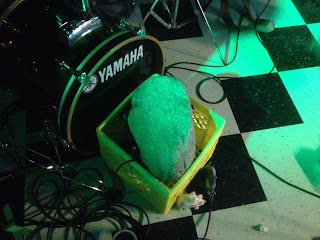 You see; Nick forgot to bring a carpet to put his drums on so we used one of the crates we carry cables in and got some heavy rocks from outside to hold his gear in place. When we said we were going to "Bring The Rock To Ucluelet" we f#@%ing meant it! Thanks again to Dale, Ken and all the other awesome staff at Officials
If you have any shots from Saturday in Ukee we'd love to see them: BallisticPig@gmail.com
So, for now it's our usual jam night at Jack's in Tofino Monday then, this weekend we get to take a break and check out our good friends The Ross Neilsen Band! They're playing a few shows in Tofino in Ucluelet in the next week or so and you can bet we'll be there. Here's a tune of their brand new album Resurrection which you may have heard on Long Beach Radio:


Thanks again to everyone who came to rock with Ballistic Pig this weekend. For the moment our next non-jam gig is an Acoustic Pig set at Tofino's village green market on Saturday, June 29 at noon but we suspect some surprises shows will pop up between now and then so check the listing up and to the right.

Well, there's a spate of sunny weather coming to the rain forest and the folks at Tofino's Tuff Beans are making the best of it on their patio tomorrow (Sunday, June 2nd) with a couple sets from our 2-piece arrangement "Acoustic Pig"! We go really nice with some sun, cheap beer and caesars.... I promise! 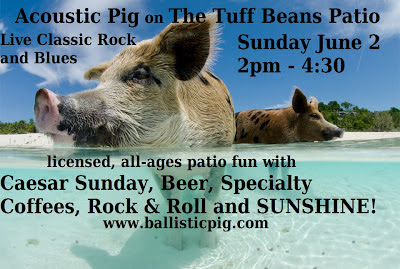 Don't forget about jam night at Jack's on Monday, too.. Enjoy the sun and don't miss out on some Ballistic Pig fun!