Hi folks, haven't need very diligent with the blog lately.... so much stuff going on;

First off, my solo album Women and Losin' is now all over the Internet from iTunes to Amazon to CD Baby and many places in between so check it out, stream it, download it, whatever and let me know what you think. If you're reading the blog on the full version of the website there's a little player to the right where you can check it out.

Also, we've been playing lots of gigs! In addition to the usual Monday jam at Jack's in Tofino and my Thursday's at Black Rock we brought to full band on a mini tour over this passed weekend: Friday night we played at Wolf In The Fog as part of the Tofino Salt Water Classic charity fishing derby and Saturday we hopped in the Jeep and drove ot Bamfield to play their 32nd annual fundraising BBQ and dance... We are now all madly in love with Bamfield by the way... thanks for having us! Special thanks to Paul at Pirate Tours for a very unique and memorable tour around on his funky boat. Drummer Joel's lady took some pictures of the gig I'll post later but for now here are a few visuals

Also, on July 2. Julian, visiting from the UK got up and sang a few songs with me at my solo gig at Black Rock. While I played the solo to Purple Rain he went and proposed to his ladyfriend, Liz! 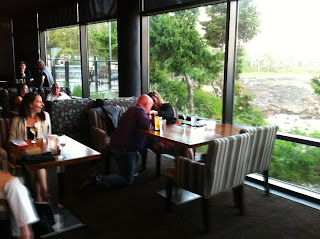 Also, big thanks to Lance LaPointe for having me out to Port Alberni to sit in with his band on Canada Day!

Coming up this week:
-I return to Black Rock on Thursday evening for a solo set.
-I'll be playing a set of the tunes from Women and Losin' on Friday night at the Ucluelet Night Market. Daz will also play a set of his Garvies originals. I think we're on from 5-7pm
-A couple wedding ceremonies, too.