The Small World of Canadian Music Just Got A Little Smaller

We're not even close to big time Canadian musicians here at Ballistic Pig but we have have met some big-time awesome people! I (Geoff) have had the particular good fortune to interview or otherwise interact with a lot of the acts that have come through Tofino and Ucluelet during my time with Long Beach Radio.

Well, a couple summers ago I met Jay Smith as he came through town with Matt Epp. It was a short meeting but I know that both men were commited, talented musicians and, more importantly, genuinely great guys. I learned yesterday the Jay passed away this week after a gig in Edmonton with Matt Mays. It took me a while to remember which band I had met Jay through but I instantly remembered the way he made me feel.

Thanks Jay for being one of those inspirational road warrior musicians who kept his soul while giving it away every night on tour. Thanks Jay for having the courage to balance the love you had for you family with the love of your craft. From what I've been reading today I'm not alone in feeling a distinct loss at the news of Jay Smiths passing, I don't know the details but that's not important. What is important is that the family he loved and the music he created is remembered in a time when the have both been so dramatically changed.

If you would like to support Jay's family please have a look at Matt Mays' website www.mattmays.com and I think I'm gonna crank Romantic Fool and Rock Ranger Record and tip a beer for Jay. I don't know if he would ever have said he was my friend but I know we were kin in many ways.

Thanks for reading, Geoff
Posted by Geoff Johnson at 16:22

Trying to populate the blog in these early days we thought a series of posts about some of our more interesting gear could be fun. So here's our first edition of Exploring The "Pig Rig" featuring Geoff's Sennheiser 441 microphone... It's sort of special for a number of reasons, not the least of which being it's odd appearance. 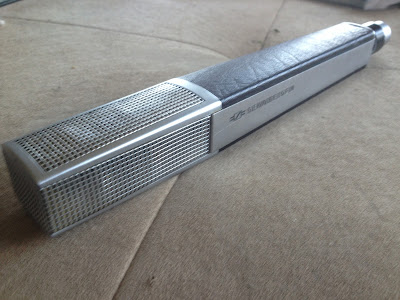 As you can see by the following ad they've been making them for a while and Geoff's is serial number 009811 which, by my estimates places it's manufacture somewhere in the mid 70s. If you have a chart for dating these things I'd love to know for sure as I picked mine up in a pawn shop in southern Alberta for an insane price (it needed a little soldering) so I don't know it's original purchase date. 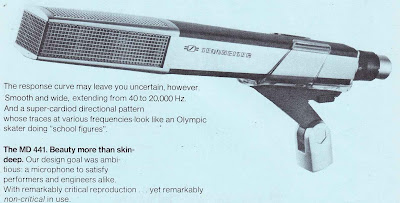 
I'd post the Prince video for "Kiss", a song where he recorded the vocals with a 441 but he'd probably send a team of assassins to destroy me as is his style... So here's an awesome video of him playing guitar instead


So there you go, some largely uninteresting drivel about a microphone.

Possibly more interesting is the news that this weekend we'll be practising some tunes with our occasional lady singer Tara "Hamila" Kean. She'll be joining us for a couple shows at Jack's Pub in Tofino on April 12th and 13th and we hope you can join us too.

Our next "gig" is jam night this Monday (also at Jack's) come rock some tunes with us!

Finally, Happy Birthday to Hawksley Workman, here he is performing a song Geoff's been known to cover in past bands... maybe it will find its way into a Ballistic Pig show one day

If you attended our jam nights at Jack's Pub in Tofino this winter you likely heard some great vintage blues performed by David Quinn. He came by the Electric Piggyland studio last night to lay some tracks. We recorded some Blind Willy McTell, Skip James and Robert Johnson... It doesn't get much better than that. We recorded guitar and vox in the same take like the originals, no click... just the blues!
﻿﻿


Dave will be back for a little more recording in early April and we might have some demos up here then.

On another note, a tip of the hat to Leo Fender who passed on this day in 1991. Chester and Geoff are both Fender players for the most part, Stratocasters and Jazz basses in particular.﻿

Our next "gig" is jam night on Monday at Jack's. Hope to see you there.
Posted by Geoff Johnson at 11:02

Hi bacon lovers, music fans and other weirdos. Welcome to the official online home of Tofino and Ucluelet's party rock band Ballistic Pig. We'll be populating this page with useful Pig related information over the coming days so come back often!
Posted by Geoff Johnson at 11:49