It's was a busy couple weeks for the new Ballistic Pig lineup. We had lots of rehearsal and a couple Halloween parties. The new team is really starting to come together. Our fans are also pretty awesome! Check out the Pig-o-lantern that Coral made: 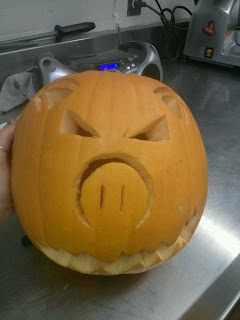 Halloween at Official's was pretty awesome, too! Killer crowd packed the dance floor all night and it made for a great first gig for Tara and Jamie... They also had insane decorations

Past Pig Chester dropped in for a jam a couple Mondays back and took some stylish pictures:


Gig-wise we're in Port Alberni at The Blue Marlin Inn on November 15th and at Jack's for the weekend November 29, 30th.... For those folks in Tofino you know that weekend is "Jingle Into Christmas" so I guess Ballistic Pig at Jack's will be the Jingle After Party!
We also have a few other tentative bookings that may pop up in the coming weeks, stay tuned. (all confirmed gigs are posted in the calendar to the right)
Geoff's also been writing lately so Ballistic Pig originals might not be too far away.

Hope to see you at a gig or jam night soon. Thanks. -Geoff