Hi folks, Geoff here. Today is a pretty cool day because long time Tofino residents (even though they moved to Victoria now) Paul and Lisa Jarvis release their new album. When they're in rock star form the call themselves Mojave and their new album entitled Rainy Ghost was produced and engineered by Yours Truly (that means me). 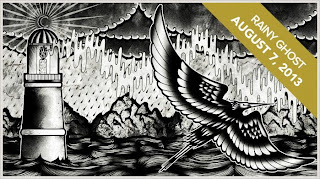 An acoustic album on steroids Rainy Ghost was a blast to make and something I'm very proud of. Big thanks to Mario for saving me a bunch of work mixing and putting a lot of his own character into it as well. Of course, thanks to Paul and Lisa for asking me to do it and the Morrisons for the space that turned out to be an unexpectedly good recording studio on Chesterman Beach.

So, you should go to www.mojave.fm and follow the appropriate links to buy it, then you should listen to it a lot and tell your friends to do the same. I'm not saying this because I'll make a penny from every mp3 (I won't, all the proceeds go to buy food for homeless llamas and other hippie things.... seriously). I'm doing it so that you will all be amazed by my genius and nominate me for awards..... not seriously.

The album also features a remix by Alan Churchill and some drums via Tsimka Martin, both awesome Tofino folks.

You can stream it all here for free:

Hopefully Mojave will be able to come to the coast for a CD release event in the near future. Keep tabs on them on Twitter @MojaveBand and if you want to pay me huge sums of money to produce your next album email me at BallisticPig@Gmail.com

Thanks for reading, Ballistic Pig will see you this Friday evening at a free, all ages show at The Tofino Village Green where we'll be one of the entertaining acts at the big Friends Of Clayoquot Sound event for the 20th anniversary of the 1993 mass arrests. (Google it if you need to)