Well, we have a deal over here at Ballistic Pig, if you sit in with us for a significant portion of a "real" gig you become an Honorary Pig! On Canada Day last week we were fortunate to have Mark Crissinger sit in for 2 gigs (in one day). Ontarians may know Mark from his days playing guitar with the phenomenon known as Caution Jam.  Before we get around to talking about how awesome Mark's guitar playing is here's a terrible pic of Mark (left) with Chester and Geoff; 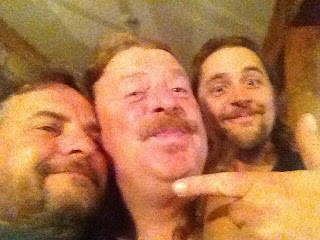 Better pictures, some audio of his swanky six-stringin' and some background on Mark can be found on his Reverb Nation page or RIGHT HERE!!

Learn how to get a song on itunes at ReverbNation.com

Mark will be back on the west coast to play in September so keep your ears peeled!!

As far as Ballistic Pig goes our next confirmed (non-jam-night) gig is July 19,20 at Jack's, hope to see you there!

Also, coming up in just a few weeks we'll be opening for 3 time Juno nominee Earl Pereira and his band of super talented and generally awesome guys call The Steadies! That's at The Tofino Legion on July 27th. It's gonna be a reggae-rockin' good time.. For those of you who don't know The Steadies you can check out some of their stuff here.

Well, thanks for dropping, talk soon. -GJ
Posted by Geoff Johnson at 16:01